No stranger to discomfort, Smeal graduate forges her own path to entrepreneurship.

“I’m the founder and CEO of a startup beverage company that launched in the first month of a global pandemic and is now raising seed-round capital at the beginning of what some predict will be a major economic downturn,” she says with a tone of incredulity. “So, I’d say I’ve definitely become used to being uncomfortable! But there’s a lot to be learned from discomfort. It forces you to grow.”

Dougherty’s first taste of discomfort came when she chose Penn State for college. It was a huge change from the small boarding school she previously attended, but that’s what she craved – different experiences, different people, different perspectives. Her love of math led her to major in finance and economics.

Flash forward four years and Dougherty found herself graduating smack dab into the Great Recession (more discomfort!). But she landed a job with Johnson & Johnson and set upon a standard path – getting accepted into J&J’s Finance Leadership Development Program, completing an MBA, and taking on increased responsibility. 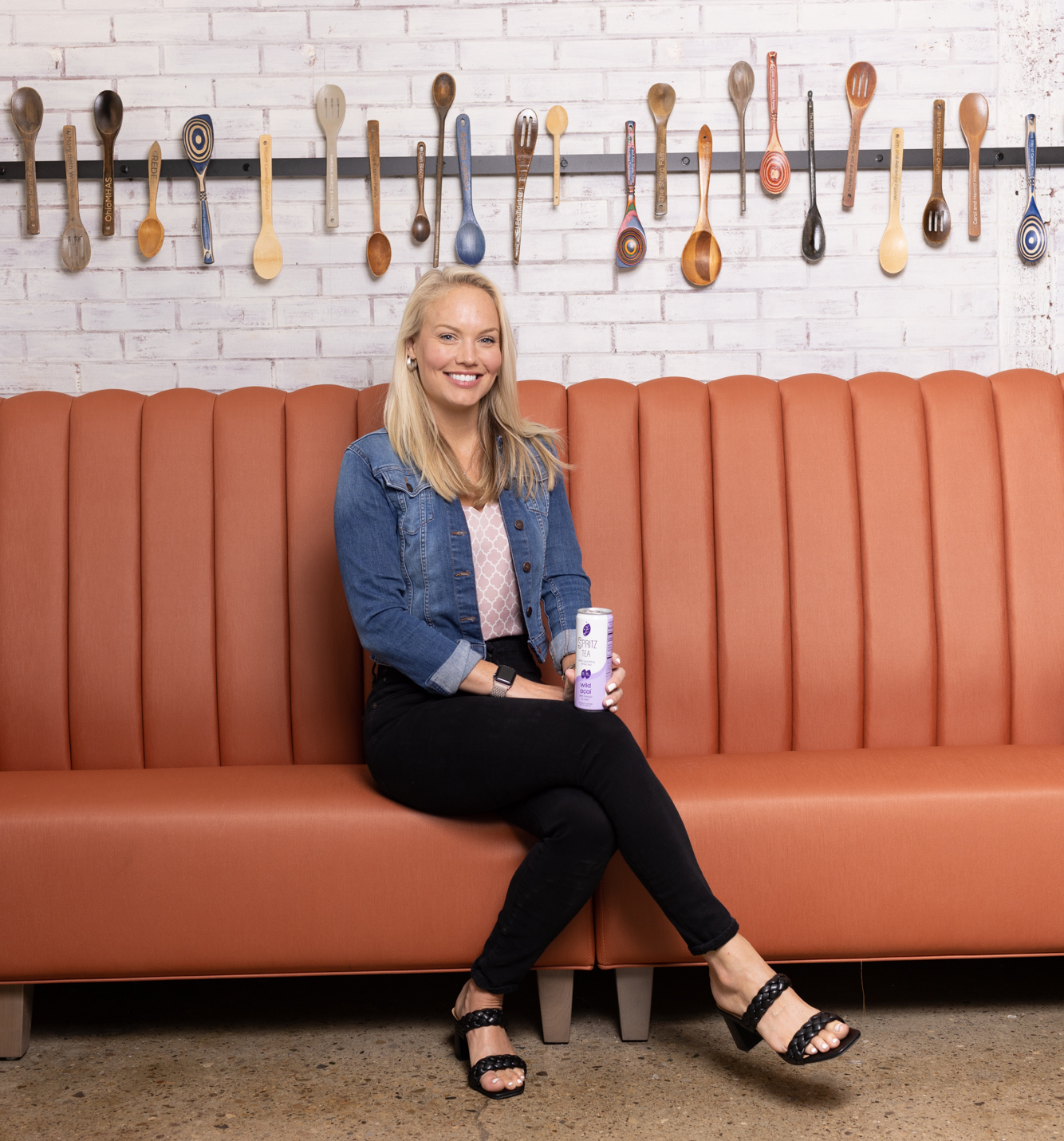 Her entrepreneurial spark was lit around six years ago when several things converged in her professional and personal life. At the time, she was working with entrepreneurs in the health tech space.

“I started to see what it was like to build something, to change culture, to raise money,” she says. “But 98% of the health tech entrepreneurs were male. I didn’t see myself. That’s when I started to think about entrepreneurship. I considered doing something with medical devices because that was my background, but the entire time I had another idea in the back of my mind.”

That other idea was born while Dougherty was training for a half Ironman. She had stopped drinking alcohol while training, but she loved dinner parties and “water is boring,” she says with a laugh.

“I wanted something pretty and something that tasted good to put in a champagne or wine glass,” she shares. “I was a huge tea drinker, so I thought, ‘what if I made some cold hibiscus tea and bubbled it?’ So that’s what I did, and my friends and I loved it. At no time did I think I would make a beverage company out of it.”

Still, the idea wouldn’t go away, and the personal and professional “playbook” Dougherty was working from increasingly felt…restricting.

“Entrepreneurship is interesting because it teaches you that there really aren’t as many rules as we all think there are,” she says. “We’re taught to follow this path. Go to college, get a job, make some money, get married, have kids, buy a house. But that doesn’t have to be your life. You can restart and reboot your life as many times as you want. If you try something and hate it, that’s not a failure. That just means you learned.”

Dougherty decided to hit the restart button. After a year of laying the groundwork, doing market research, concept testing, and raising an initial round of capital, she quit her job at J&J and launched Spritz Tea in January 2020.

“Spritz Tea is a line of non-alcoholic spritzer drinks that comes in four flavors,” she says. “We sell direct to consumers, but we’re also sold in about 400 locations, predominantly in the Midwest but and also on U.S. military bases in Japan. We’re currently in a Kroger pilot, which is by far our biggest accomplishment to date.”

Notable about Spritz is its commitment to donating 1% of sales to non-profit organizations. It’s a commitment that’s printed on every can.

“This springs from my personal beliefs about supporting organizations that can drive change,” says Dougherty. “Also, when making a purchasing decision, I personally assess which companies share my values and I know a lot of consumers who do the same. So, in addition to having cute packaging and all-natural ingredients, we’re also going to be a company that is aligned with the things our customers believe in.”

As Dougherty looks ahead at her company’s future, she can’t help but look back.

“The great thing about Smeal is that you are exposed to so much, which helps you figure out what you’re good at and what you enjoy,” she says. “Smeal gave me the hard skills I needed to understand and succeed in business. But it also gave me soft skills that helped me begin to learn how to own my life. How to think about which playbook I should be choosing, whether I even wanted a playbook, and how I can make a playbook specific to me.”

Dougherty has stayed involved with Smeal, serving as a keynote speaker at the college’s annual Powerful Women Paving the Way conference and having a student look at her company’s social media strategy as part of the student’s capstone project.

When asked what her goals are for Spritz Tea, she replies that she wants to “run a successful experiment.”

“Entrepreneurship is like one big science experiment, right?” she says. “I have a theory that this could work, I need a little bit of money, I’m going to run a test, I’m going to look at the results, and I’m going to draw a conclusion about what to do next.

“If we’re doing well, I’ll raise more capital to continue doing well. If we are not doing well, I’ll try to understand why and if it’s solvable. If it’s not solvable, I’ll say I tried, it didn’t work, let’s wind this down and find something that does work.”

Buckle up – potential discomfort ahead. Just the way Dougherty likes it. Kathryn Dougherty ’09 Fin & Econ hit the restart button on her career when she realized a passion for entrepreneurship. She is the founder and CEO of Spritz Tea, a line of non-alcoholic spritzer drinks that come in four flavors.